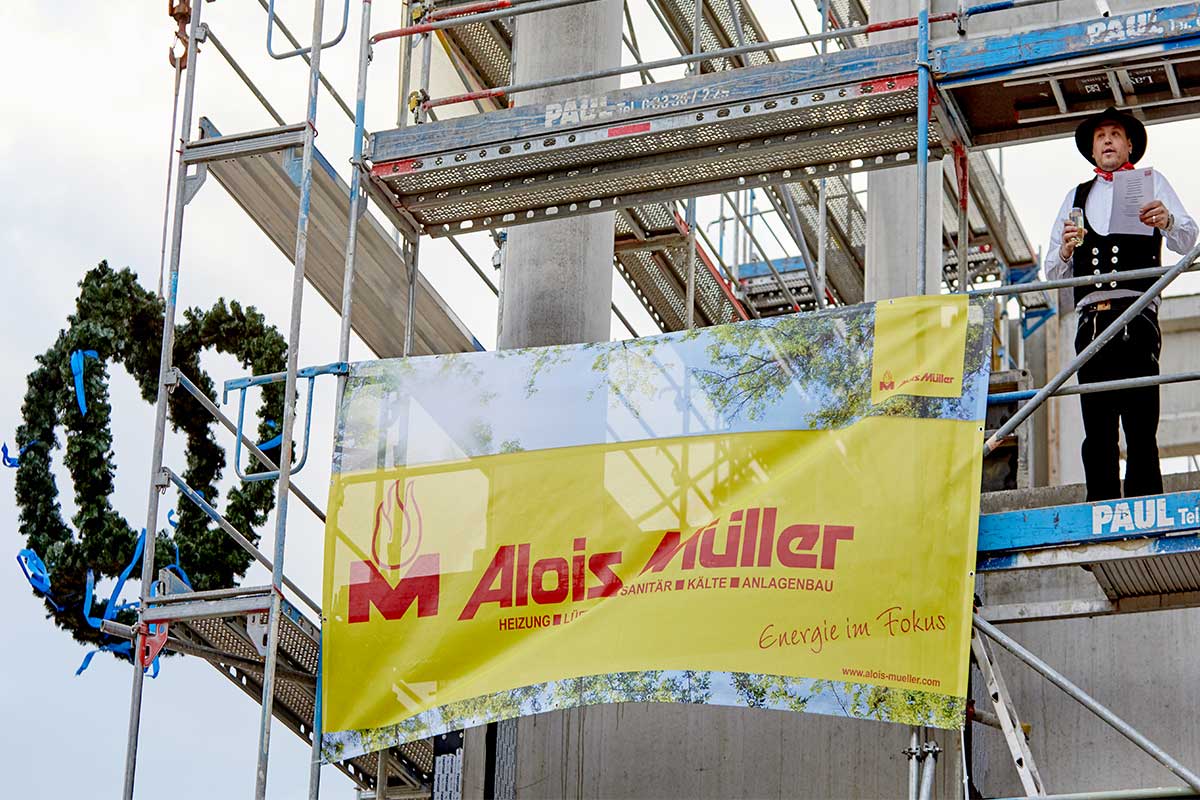 Alois Müller celebrates the topping-out ceremony of the world’s largest almost energy self-sufficient production and office building. This is what advanced energy efficiency looks like: After an intensive and exciting construction period, the Alois Müller Group’s Green Factory 2.0 in Ungerhausen in the Unterallgäu (region of Germany) has already taken shape. On an area of 18,000 sqm, the new building is currently being constructed under the management of the construction company of Memmingen, Josef Hebel GmbH & Co., the largest almost energy self-sufficient production and office building in the world is currently under construction. The shell of the building has now been completed, and the Green Factory 2.0 will be commissioned step by step over the coming months: Production in the new production areas will start as early as April, and the administration is to move from Memmingen to Ungerhausen by the beginning of 2019 at the latest.

The new Green Factory 2.0 of Alois Müller GmbH is particularly sustainable, because the production and office buildings can be operated almost energy self-sufficiently. An approximately 10,000 square meter photovoltaic system with a total output of 1.1 MW supplies the green factory with 90 percent of the energy required for electricity, cooling, heat and compressed air. The last ten percent is covered by a combined heat and power unit (CHP). This reduces energy costs and CO2 emissions to zero. A 200 kW pellet heating system is also integrated into the energy concept.

On the other hand, with this new investment the Alois Müller Group is also positioning itself as an innovative employer with top working conditions. “We work as a service provider for the who-is-who of the German economy. For this we need the best employees. And we will only get them if we offer them the best working conditions,” says Müller.

“On the construction site, things are running smoothly. We are making good progress and are right on schedule. It’s great that we can celebrate the topping-out ceremony for Green Factory 2.0 just six months after the official ground-breaking ceremony. This shows once again how excellently everyone involved in this project works together. This is the only way we can ultimately keep to our ambitious schedule. I would like to thank first and foremost our partners at Josef Hebel and the other companies who were involved in the construction. They have really done a great job and laid the foundation stone for us now to be able to start with the technical building equipment with our own specialists as planned”, explains Andreas Müller, Managing Director of Alois Müller GmbH.

The approx. 4,000 sqm Green Factory of the Alois Müller Group, which has already existed since 2012, will be expanded by a further 10,000 sqm of additional production and storage space as well as another 4,000 sqm for offices, administration, training and a canteen in the course of the current construction measures.

After its completion, the new Green Factory 2.0 will be supplied almost exclusively by a 1.1 MW photovoltaic system with regenerative solar energy. In the new factory, which will be put into operation step by step from spring 2018 and whose construction is financially supported by the European Union, Alois Müller GmbH will in future mainly manufacture energy module systems and other supply technology components for plant construction, such as piping systems made of steel and stainless steel.

Six years ago, Alois Müller GmbH built the first Green Factory in order to significantly increase the degree of prefabrication and thus be able to offer customers a significantly higher quality. “This strategy worked out perfectly and so it was only logical for us to take the next step in this direction. So that we can continue to serve this growth market in the future. To do so, we had to continue to grow ourselves and invest in state-of-the-art technologies,” explains Andreas Müller.

The view goes in two directions: On the one hand, Müller wants to show industry by example how sustainable, resource-saving production environments can be implemented in practice. “For many companies, the future will be all about combining decentralized cogeneration and photovoltaic systems so that they can make the best possible use of PV electricity themselves. This is the new type of sustainability that will become established in the industry in the coming years. Our Green Factory concept is already 100 percent successful. If every factory in the world were a Green Factory, we would have completed the energy turnaround long ago,” says Müller.

Thus, not only will state-of-the-art high-tech equipment such as a new painting and sandblasting plant be installed in Green Factory 2.0, but the office and administration building will be designed like a campus and equipped with modern training rooms and a canteen for Müller Group employees. Special emphasis is also placed on training the next generation of employees, and so the production hall is also a training hall at the same time. At the Ungerhausen site, the trainees learn their professions in one of the most modern and at the same time most energy-saving training halls of the trade of sanitary, heating and air conditioning.

In the course of the expansion of the “Green Factory”, the entire plant construction of Alois Müller GmbH will be relocated piece by piece from Memmingen to Ungerhausen. Noise and traffic-intensive work will thus be shifted to the motorway with foresight. The head office of Alois Müller GmbH as well as the main focus “Engineering” and “Service” will remain at the Memmingen location. “By splitting up, we are creating the optimum conditions for the different fields of work. In this way, we are creating the space that will allow us to grow sustainably in all areas in the long term. And this is urgently necessary,” says Müller.

The heart of the “Green Factory 2.0” is the new energy centre, in which the entire energy management of the Ungerhausen plant is controlled. The sophisticated energy management system comes from e-con AG, the specialists for energy consulting and contracting. Not only Alois Müller GmbH, but also the entire Ungerhausen industrial estate benefits from the Green Factory concept. Surplus cooling and heating energy is fed into a common network, so that neighbouring companies are also supplied with energy. Generated electricity that is not required in the Green Factory is fed into the general power grid and is remunerated.

The be-all and end-all here is a sophisticated energy management system. An intelligent power grid continuously monitors the power consumption of the machines and controls the switch-on times of the systems in such a way that peak loads are avoided. To ensure that the Green Factory and its machines are reliably supplied with energy at all times, large buffer storage tanks are installed. They store energy for heating, cooling and compressed air as well as electricity. When required, these “reserves” then flow into the Green Factory’s energy network, for example when production loads are particularly high or on days when the sun is not shining.

For the technical building equipment (TGA), the Alois Müller Group relies fully on digital maintenance and servicing in Green Factory 2.0. All systems are equipped with so-called intelligent sensors, which automatically report faults in the event of an incident. By networking the entire system technology, malfunctions can be remedied centrally, all parameters can be changed and maintenance processes can be started fully automatically. All data are recorded digitally precisely and completely and can be processed immediately. “In our energy and management centre we have all processes under control. The fully digital building technology reduces reaction and downtimes. And the sooner you can react to problems, the lower the risk of damage and costs,” explains Andreas Müller. This so-called smart maintenance approach is of elementary importance in facility management, not only in the company’s own green factory, but above all for customers from industry.

Alois Müller GmbH also focuses on sustainability when it comes to “mobility”. A total of eight charging stations for electric vehicles are being built on the company premises in Ungerhausen, which can be freely used by everyone. Two of them are so-called fast-chargers with 120 kWh each, which recharge the battery of an electric vehicle within 20 minutes. “The topic of e-mobility naturally also plays a major role in our company. In the long term, we want to convert our fleet to e-vehicles. We are already creating the necessary basis for this step in Ungerhausen,” says Andreas Müller.