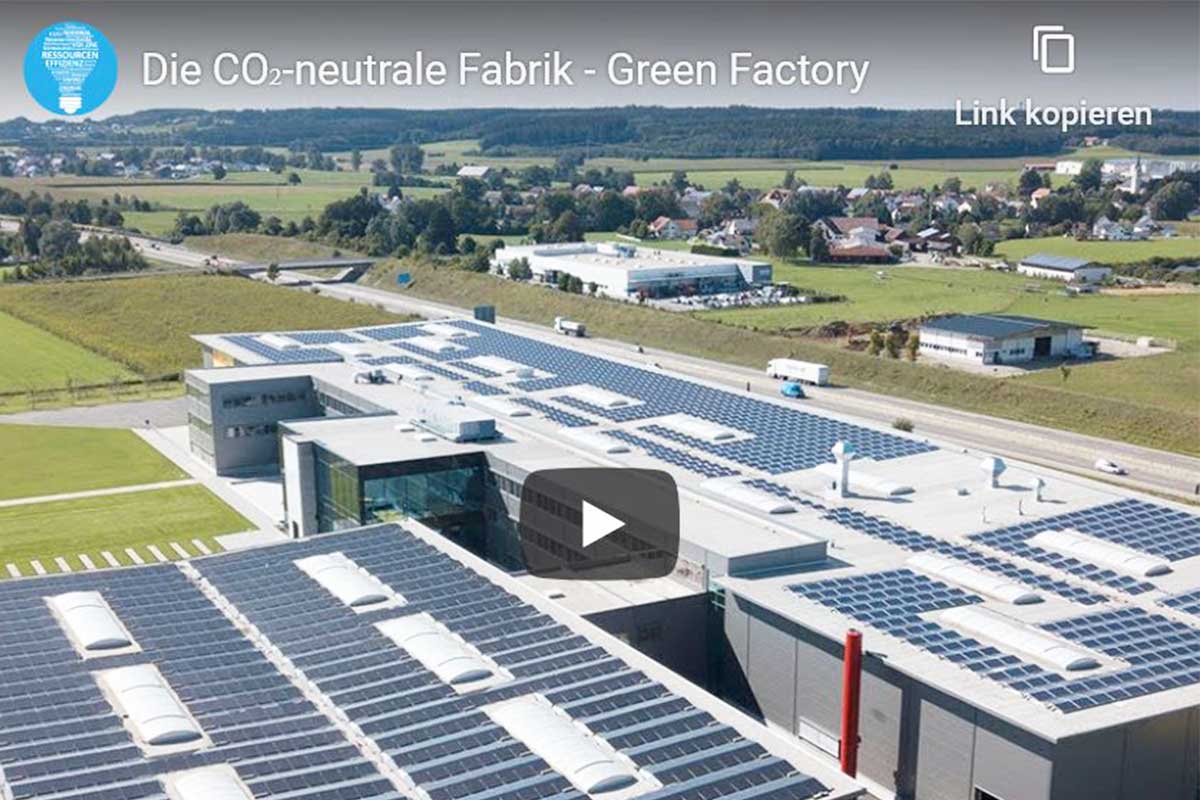 The new film “The CO2-neutral factory” by the VDI Centre for Resource Efficiency (VDI ZRE) shows how the Allgäu-based company Alois Müller has made its energy supply sustainable. With its own solar system, a combined heat and power plant, a pellet heating system and production processes that are tailored to electricity generation, it is possible to produce almost CO2-neutral.

In 2019, the Allgäu-based company Alois Müller opened the Green Factory, an almost energy self-sufficient production and office building at the Ungerhausen site. Heating and ventilation systems as well as parts for metal construction are produced here.

A photovoltaic system on the roof of the production hall supplies two thirds of the required electrical energy with a maximum output of 1.1 megawatts. In addition, electricity is fed into the public grid. Excess waste heat from the biogas-powered combined heat and power plant and a pellet boiler is collected in a 100,000 litre buffer storage tank. This is later used by the company and fed into a local heating network to supply the neighbouring company.

The entire production planning is designed to ensure that the solar power is used optimally. This only works with digitized processes. An intelligent ERP system gives the production manager an overview of the power consumption in the next few hours and the power supply from the roof. Therefore, the most energy-intensive production steps are timed to match the power supply. This also applies to the production of auxiliary materials and supplies used as energy storage.

To make optimum use of solar power, self-produced nitrogen, demineralised water and compressed air serve as energy storage. These media are usually produced when the sun is shining. Preferably at the weekend, when production does not require energy. In addition, a 230 kWh lithium battery absorbs the solar power.

If the sun does not shine sufficiently, a combined heat and power plant powered by biogas covers the energy demand. If it is cold for longer, a pellet boiler provides additional heat. The electricity produced by the company itself is used to operate its own electric filling station, which is also available to vehicles not belonging to the company.

The film “The CO2-neutral factory” is available on the YouTube channel of the VDI ZRE „Ressource Deutschland TV“ or in the WebVideomagazin.